Faces of Poverty: Monetary and Multidimensional Child Poverty in Ethiopia

The Social Policy Research Institute was happy to provide technical support to the Central Statistical Agency of Ethiopia and UNICEF Ethiopia in conducting a study on the overlap between monetary and multidimensional child poverty in Ethiopia.

Monetary and multidimensional child poverty are complementary rather than substitute measures, with complex interlinkages, and both should be used in informing policies and programs aiming to enhance children’s wellbeing.

This study builds on the findings of the First National Estimates of Multidimensional Child Deprivation in Ethiopia, and is the first of its kind to provide an in-depth analysis on the disparities between multidimensional and monetary poverty among children, and the extent to which these experiences of poverty do and do not overlap. This analysis provides evidence to unpack the extent to which household financial means, as well as the availability and accessibility of public services, are related to children’s unmet needs in the sectors of nutrition, health, education, child protection, and water, sanitation and hygiene (WASH). The findings are presented to guide policy and programming that targets the fulfilment of children’s rights and needs.

The key findings of the study include the following: 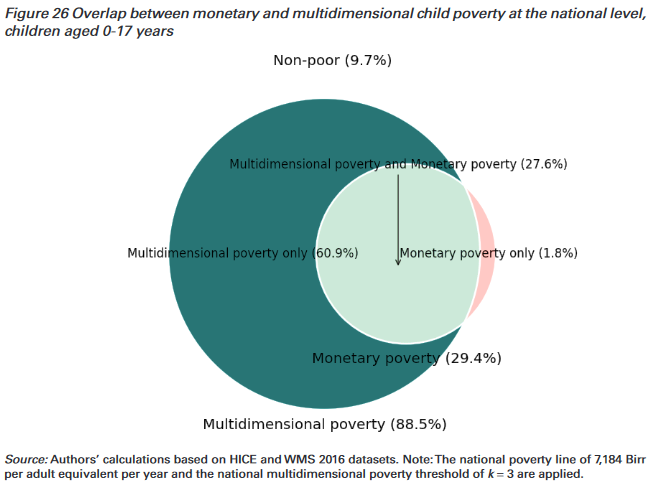 Access the study: Faces of Poverty: Studying the Overlap between Monetary and Multidimensional Child Poverty in Ethiopia