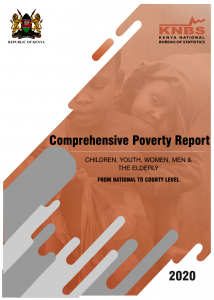 Monetary and multidimensional poverty, as well as the overlap between both types of poverty, were measured for all age groups in Kenya: children under 18, youths age 18-34 years [national definition], adult women and men age 35-59 years, and elderly age 60 years and over. The results are available at the national and county level. For the monetary poverty measurement, the study applied the 2015-16 national poverty line[1] and for multidimensional poverty measurement and poverty overlap analysis the study applied the UNICEF MODA[2] toolkit. Factors associated with poverty were identified using logistic regression analysis.

Why is this study important?

Globally, poverty measurement has, in the past, primarily used income or expenditure for the identification of the poor. This understanding has however evolved over the years as studies have shown that monetary poverty does not capture all deprivations that individuals face with access to basic goods and services due to factors other than lack of financial resources. Therefore, monetary and non-monetary poverty approaches are vital for better informed policy decision making. The Sustainable Development Goals (SDGs) explicitly include a target on reducing multidimensional poverty. It is within this framework of understanding and against the backdrop of the 2030 Agenda for Sustainable Development that this report makes a first official attempt to compare multidimensional and monetary poverty across different age groups and assess to what extent they are associated.

With this study Kenya closes the loop of evidence-generation to measure the country’s progress in achieving SDG target 1.2. “By 2030, reduce at least by half the proportion of men, women and children of all ages living in poverty in all its dimensions according to national definitions”. More importantly, the 47 counties now have evidence on poverty and deprivation of basic needs and services in their areas and can make informed decisions. The central level institutions have evidence on geographical inequalities in well-being for different population groups and can better plan resource allocation to reduce them. Analysis of poverty overlap and of key drivers of poverty and deprivation among children, youth and women shed light onto the mix of sectoral interventions that are required to tackle poverty effectively.

The most relevant findings for child poverty in particular include:

The full range of findings of the comprehensive poverty analysis of children, the youth, women, men and the elderly can be accessed by downloading the full report.

How is this evidence relevant in the light of the pandemic?

Evidence from the ongoing global COVID-19 pandemic has demonstrated that the poorest and most vulnerable populations are the groups that are most affected by both the direct effects of the pandemic on human health and health service systems, as well as by government measures in response to the pandemic.

This study highlights critical vulnerabilities and gaps of access to essential services specific to children, the youth, women, men and the elderly, which may be exacerbated by both the direct and indirect effects of the pandemic. Addressing these gaps will be critical in protecting these groups from the worst effects of the pandemic, and from potential reversal of progress made in poverty alleviation due to pandemic-related social and economic fallout in the country.

Alongside the effects of the pandemic, Kenya has also recently confronted the devastating effects of environmental, climate and food insecurity-related shocks, including flooding and locust infestation. Building resilient and adaptive protective systems and policies will be instrumental in managing both ongoing and future shocks, while protecting Kenya’s most vulnerable populations. This study provides an evidence base, as well as policy options and recommendations, for the priority actions needed to protect and alleviate hardship for Kenya’s most vulnerable populations.